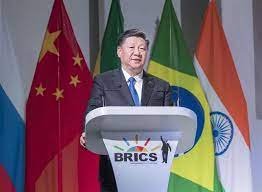 Noting that this year marks the 15th anniversary of cooperation among the BRICS countries, Xi Jinping pointed out, over the past 15 years, we the five countries have followed the principles of openness and inclusiveness and treated each other as equals, enhanced strategic communication and political mutual trust, respected each other’s social system and development path, and continuously explored a right approach to co-existence among countries; we the five countries have insisted on being pragmatic and innovative and cooperating for win-win outcomes, synergized development policies, leveraged complementary advantages, pushed forward pragmatic cooperation across different fields solidly, and forged ahead on the road to common development; we the five countries have remained committed to equity and justice and worked for common progress, supported multilateralism, participated in global governance, and grown into an ignorable crucial force in the international arena. So far this year, we the five countries have, in spite of the COVID-19 disruptions, carried forward the development momentum of BRICS cooperation and scored new progress in many fields. The facts have proven that no matter what kind of difficulties we go through, BRICS cooperation will go far ahead on a steady and firm footing as long as we focus our ingenuity and energy on the same goal.

Xi Jinping pointed out, at present, the COVID-19 pandemic is still wreaking havoc around the world. The road to global recovery remains bumpy and tortuous. And the international order is going through profound and complex changes. Facing these challenges, we the BRICS countries must step forward to make an active contribution to world peace and development and advance the building of a community with a shared future for mankind.

-We need to promote the practice of true multilateralism, adhere to the purposes and principles of the UN Charter, and safeguard the UN-centered international system and the international order underpinned by international law.

-We need to promote global solidarity against COVID-19, join forces to tackle the pandemic, uphold a science-based approach to tracing its origins, and oppose politicization and stigmatization. We need to enhance coordination in COVID prevention and control, and boost the research, production and equitable distribution of vaccines as a global public good.

-We need to promote openness and innovation-driven growth to facilitate a steady global recovery. We need to uphold the WTO-centered multilateral trading regime, make sure that the latest outcomes of scientific and technological progress bring benefit to all countries, and push for an economic globalization that is more open, inclusive, balanced and beneficial for all.

-We need to promote common development, follow a people-centered philosophy of development and fully implement the 2030 Agenda for Sustainable Development. We need to actively respond to climate change based on the principle of common but differentiated responsibilities, promote the transition to green and low-carbon development, and jointly build a clean and beautiful world.

Xi Jinping emphasized, under the current circumstances, it is important for BRICS countries to stay resolved, strengthen unity and further enhance the quality of practical cooperation. Xi Jinping made five proposals.

First, strengthen public health cooperation in the spirit of solidarity. We need to step up to our political responsibility, support each other’s COVID response, and share relevant information and COVID control experience. We need to pursue practical cooperation on vaccines, including joint research and production and mutual recognition of standards, and facilitate an early launch of the BRICS Vaccine R&D Center in virtual format. It is also important to strengthen cooperation on traditional medicine to develop more tools against the virus.

Second, strengthen international cooperation on vaccines in the spirit of equitable access for all. China has provided vaccines and necessary technical support for countries in need, and has made active contribution to promoting the equitable distribution of vaccines and global cooperation against COVID-19. To date, China has provided more than one billion doses of finished and bulk vaccines to over 100 countries and international organizations, and will strive to provide a total of two billion doses by the end of this year. I would like to take this opportunity to announce that on top of the 100 million U.S. dollars donation to COVAX, China will donate an additional 100 million doses of vaccines to fellow developing countries within this year.

Third, strengthen economic cooperation in the spirit of mutual benefit. We need to earnestly implement the Strategy for BRICS Economic Partnership 2025, and expand cooperation in such areas as trade and investment, technology and innovation, and green and low-carbon development. China proposes to host a BRICS high-level meeting on climate change and a BRICS forum on big data for sustainable development. We welcome the substantive progress made in expanding the membership of the New Development Bank (NDB), and look forward to a bigger role of the NDB in supporting the development of its members and in global economic and financial affairs. The BRICS Partnership on New Industrial Revolution innovation center has already been launched in Xiamen, and we look forward to active participation of government departments and business communities of BRICS countries.

Fourth, strengthen political and security cooperation in the spirit of fairness and justice. We need to consolidate the BRICS strategic partnership, support each other on issues concerning our respective core interests, and jointly safeguard our sovereignty, security and development interests. We need to make good use of BRICS mechanisms such as the meeting of foreign ministers and the meeting of high representatives for security, better coordinate our position on major international and regional issues, and send out an even bigger, collective voice of BRICS countries.

Fifth, strengthen people-to-people exchanges in the spirit of mutual learning. China suggests setting up a BRICS alliance for vocational education to organize vocational skills competitions. China will host the BRICS seminar on governance and the BRICS forum on people-to-people and cultural exchanges, and open an online training course for media professionals of our five countries. China will host the Beijing Olympic and Paralympic Winter Games early next year. We look forward to welcoming athletes from BRICS countries and around the world to demonstrate their sporting skills and achieve excellent performance.

Xi Jinping underlined, as a Chinese saying goes, “A man of wisdom adapts to changes; a man of knowledge acts by circumstances.” In advancing BRICS cooperation, we need to embrace changes of our times and keep abreast of the times. I am confident that with our concerted efforts, the BRICS mechanism will brim with renewed vigor and vitality.

Xi Jinping noted, China will take over the BRICS chairmanship and host the 14th BRICS Summit next year. China looks forward to working with its BRICS partners to deepen cooperation in all fields, forge a closer and more pragmatic partnership, address common challenges and create a better future.

The BRICS leaders had an in-depth exchange on the theme of “BRICS @ 15: Intra-BRICS Cooperation for Continuity, Consolidation and Consensus”, and adopted the 13th BRICS Summit New Delhi Declaration.

The BRICS leaders fully affirm the achievements of BRICS cooperation in the past 15 years and believe that in the face of unprecedented challenges and complex international situation, the five countries have so far this year joined hands to fight the COVID-19 pandemic, promoted fruitful cooperation in various fields, and enhanced the status of emerging economies. They are willing to continuously make common endeavors to deepen the BRICS strategic partnership and work for more pragmatic outcomes in BRICS cooperation. The BRICS leaders said they will continue to promote global solidarity against COVID-19 and oppose the politicization of COVID-19 origin-tracing, and are willing to step up cooperation on public health and vaccines, boost equitable access to vaccines, drive a strong recovery of the world economy, and work to achieve the 2030 Sustainable Development Goals. The parties reaffirm their support for multilateralism and the basic norms governing international relations and their opposition to unilateralism and hegemonism, and advocate that all countries should show respect for each other’s independence, sovereignty and equality. They will strengthen communication and coordination on major international and regional issues, pool efforts to address climate change and promote the building of a community with a shared future for mankind. Brazil, Russia, India and South Africa express their support for China to host Beijing 2022 Olympic and Paralympic Winter Games, and for China’s BRICS chairmanship in 2022 and holding of the 14th BRICS Summit.

The BRICS leaders also listened to the reports on the work of the heads of the relevant BRICS mechanisms.