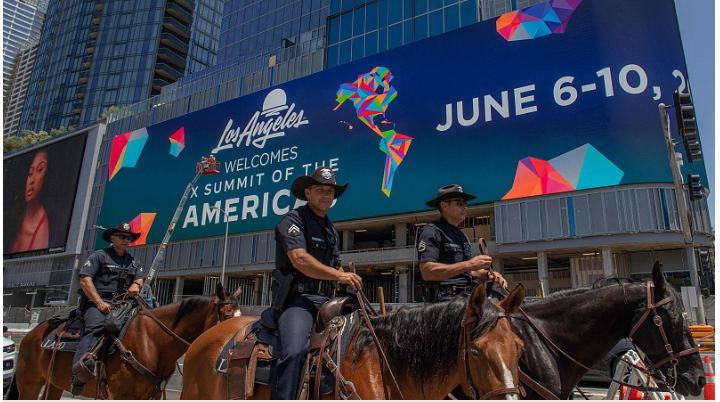 The Summit of the Americas scheduled to be held in Los Angeles between June 6 and 10 will face an awkward situation with many countries in the region skipping the US-held summit due to Washington’s refusal to invite leaders from Cuba, Venezuela and Nicaragua on the excuse of “democracy,” while many leading countries in the region like Mexico expressed opposition.

Chinese analysts said this proves that Latin America is not a “backyard” of the US, and compared to the last time the US held such summit in 1994, declining US hegemony today means Washington is unable to prevent the continent from seeking autonomy and development based on Latin American countries’ own interests.

The Biden administration has made a final decision to exclude the governments of Cuba, Venezuela and Nicaragua from the Summit of the Americas, people familiar with the matter said, despite threats from Mexico’s president to skip the gathering unless all countries in the Western Hemisphere are invited, Reuters reported on Monday.

Chinese Foreign Ministry spokesperson Zhao Lijian said at a routine press conference on Monday that the current situation proved that the US mindset driven by the “Monroe Doctrine” and its trick of using “democracy” as a tool to interfere with and divide countries are not welcome in the continent.

“Latin America is neither a ‘front yard’ nor a ‘backyard’ of the US, and the Summit of Americas is not ‘the Summit of America.’ As the host of the summit, the US needs to stop all of its hegemonic approaches, provide concrete respect to the Latin American and Caribbean countries, humbly listen to the voice of justice from the majority of this continent, make the summit focus on the shared concerns of the continent, boost cooperation and unity, and improve happiness among the people,” Zhao noted.

Guo Cunhai, an expert on Latin American studies at the Chinese Academy of Social Sciences in Beijing, told the Global Times on Monday that the situation comes against the backdrop of the recent left turn in Latin America and Caribbean, which is unprecedented and influences more countries in the region than in the past, adding that countries in the region are more united and keen to rid the continent of US control and make more independent decisions based on their own interests.

“Currently, not just Mexico and Argentina, but Brazil is also very likely to see a left turn in the election this year, and even Colombia, a country that used to have close ties with the US, is likely to see left-wing leaders. This proves that the US’ policy of Latin America has failed to take care of regional countries’ interests, and has only made them feel bullied and pressured,” Guo said.

Chinese experts said the people of almost every Latin American country have bad memories of US hegemony, as Washington has directly or indirectly supported drug trafficking, arms sales and corruption in many countries in the region, and when the US used to be powerful enough, it wouldn’t care about the sovereignty of those countries, and would launch invasions, color revolutions and even assassinations to overthrow the regimes it doesn’t like.

When US hegemony is declining and has no more resources with which to play the game of “carrot and stick”, these countries will get united and seek more autonomy, and Biden administration has used the wrong approach in the first step of the effort to reset ties with Latin America – treating Latin American countries differently based on US preferences, said experts.

According to the VOA, when the United States said last year it would host the 2022 Summit of the Americas, “officials had high hopes the event would help repair Trump-era damage to relations and reassert US primacy” over China’s growing influence in Latin America.

But these high expectations have been dashed. Even the VOA acknowledged that “ideological discord over who to invite, skepticism about US commitment to Latin America, and low expectations for major accords on issues such as migration and economic cooperation have already tarnished the event, officials and analysts say.”

Mexican president Andrés Manuel López Obrador has said he would not attend unless all governments in the Americas are invited, whatever their political stripes. The leaders of Brazil, Argentina, Bolivia, Honduras, Guatemala, and several Caribbean states have also declared that they won’t go for the same reason, and will instead send lower-profile delegations.

Heinz Dieterich, a world renowned German sociologist and political analyst working in Mexico, told the Global Times that “the ruling US power elites are totally out of touch with today’s reality” as it faces this awkward situation in dealing with the countries in the Western Hemisphere.

The US decision is formally based on Article 19 of the Inter-American Democracy Charter, imposed in the Organization of American States in Lima, 2001, by former US Secretary of State Colin Powell. The article states that “any unconstitutional alteration or interruption of the democratic order in a state of the Hemisphere constitutes an insurmountable obstacle to the participation of that state’s government in the Summits of the Americas process”.

“The historic truth is that there is no other state in the hemisphere that has destroyed more democratic governments and institutions in the hemisphere and globally than Anglo-American imperialism: the US and the UK, through direct interventions, color revolutions, economic sanctions, blockades, et cetera,” Dieterich said.

Cuban Ambassador to China Carlos Miguel Pereira told the Global Times that if the US still wants to take Latin America as its own backyard, such an idea won’t work now, because Latin America is no longer what the US has imagined, and the region has ushered in new changes.

He noted that the US’ move to exclude countries including Cuba from this summit has doomed it to fail, and what the US is trying to achieve through this summit won’t have any real impact on the Latin American region.

Guo said the US has failed to receive support from most Latin American countries for its sanctions and accusations against Russia after the Russia-Ukraine conflict began, which proves that the countries in the region are seeking a path of autonomy rather than blindly following the US on every issue.

Washington has always used China’s rising influence as a pretext to scare and pressure countries in the region, and to mobilize its internal resources to compete with China there, but in fact, this offends Latin American countries, because compared to the US hegemonic approach in the region that only serves US interests, most countries have found the China-proposed Belt and Road Initiative and other cooperation with China to be truly mutually beneficial and does not disrespect the region’s countries, said analysts.

China will surely be more welcomed in the region, and the US effort to disrupt the development of ties between China and Latin America is actually challenging the relevant countries’ autonomy, and places its hegemony over the interests of other countries, experts noted.

According to Ricardo Guerrero, an analyst and legal expert from Mexico, “Whatever the outcome (of the Summit of Americas), a controversial and conflictive summit is expected to be marked by the schism between Latin America and the US… Latin American countries are also confronting the US to demonstrate they ‘no longer want to be anyone’s backyard.’ The message has been sent: If Latin America is assembled as a whole, it is a piece to be reckoned with on the world geopolitical chessboard.”